Join Lara in her biggest adventure to date in the phenomenal Tomb Raider series. Play through five huge worlds, in any order, on the quest for an ancient meteor rumoured to have life-giving powers. New puzzles, environments, and even a few old enemies, like the infamous T-Rex await you. From the jungles of India to the icy wastes of Antarctica, across the rooftops of London and into the depths of Nevada's mysterious Area 51, Lara is ready for anything. Prepare to be amazed!

Millions of years ago, a meteor survived the plunge through the Earth's atmosphere, impacting in the then warm climes of Antarctica...

The first people to discover this land were a tribe of Polynesians. Despite the now freezing conditions, there was an abnormal abundance of life and the tribe settles, worshipping the metorite crater for the powers it appeared to hold. Generations later though, catastrophic events forced them to flee in terror...

Today, the same area is being excavated by the research company; RX Tech, who are picking up unusual readings from the meteorite's impact zone. It is in this zone that they uncover the body of a sailor from Charles Darwin's voyage on The Beagle. A few of the sailors had it seems, briefly explored the crater's interior...

Following the story from one of the sailor's journal, the research company have started to take particular interest in, not only the crater area, but other parts of the globe where the sailors subsequently travelled to...and died in...

One of these places is India - where Lara is currently searching for the legendary Infada artefact. Unaware of its true history, she only knows that in local beliefs it was supposed to hold great powers and hs been revered by tribes there throughout the years...

As well as performing all the moves in Tomb Raider II, Lara can now crawl, sprint, monkey swing and roll while sprinting. New weapons come into play as well as new vehicles. The game still uses the original engine used to create the previous two games. The graphics have improved since the portrayal of fire and smoke has been advanced, with real effects rather than showing a 2-D moving image as done in the previous two games. The graphics concerning flares makes use of this advancement. Secrets in the game are back to the original form of medipacks, ammunition and weapons. A bonus level can also be unlocked when 60 secrets have been collected.

With new weapons comes the Rocket Launcher, which only makes its appearance in this game. Lara also has new outfits including a sleek catsuit in London, to desert combats in Nevada. This game also introduces more screenplay to the plot, with short cutscenes appearing at the end of nearly every level. Tomb Raider III also introduces Lara to a more urban and modern environment, with the city of London, and the eerie Area 51.

Croft Mansion has also changed. The hedge maze has been replaced with a fantastic quad bike course which must be unlocked. The house has been given new décor with new secret passages. The assault course has been modified with the introduction of monkey bars and a shooting range. Lara may also use Winston as target practice. A secret treasure room is also up for exploring. The mansion serves as the game's training level. The assault course is timed like in the last game.

An example of an enemy in India 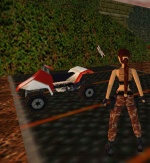