Tomb Raider II is the second game of the Tomb Raider games series. The story begins one year after the events of Tomb Raider Unfinished Business. An expansion came out in 1999 with a separate 5-level adventure attached. This expansion was known as Tomb Raider II Golden Mask.

A Android port was released on 28 October 2015.[3] It combines Tomb Raider II and The Golden Mask into one download. It also features Achievements that can be earned on Google Play.

Lara on The Great wall.
China

The canals in Venice.
Venice

The Deck of the M.D.
Rig and Maria Doria

Legend has it that when you drive the Dagger of Xian into your heart, you acquire the power of the dragon. Literally.

In Ancient China, the Emperor was the holder of this power and with his army alongside him, he was a force to be reckoned with. Thus he staked claim to the vast lands that are China.

His final battle however ended in defeat. While people fell into submission all around him, the Warrior Monks of Tibet would not relent and courageously fought against his evil. Knowing the power of the dagger, they succeeded in removing it from the Dragon Emperor's heart - reducing him and his army to carnage. The dagger was returned to its resting place within The Great Wall and locked up for all time...

Now three parties hold the dagger close to their heart. And all for entirely different reasons.

Lara, forever the adventurer, is one of these. In her travels, she will encounter the other two... [4]

A note from the script writer

... Vicky Arnold, Core Design's script writer for Tomb Raider 2 ... writes, "The Emperor is the dragon; the idea being that the dagger will give this power to whoever has enough belief to drive it into their heart - and that his warriors who fight alongside him will have added powers too. Hence the Fiama Nera cult's interest in the dagger. The guy with the disturbing green eyes is one of the Emperor's generals and when the dragon is killed, he and the other soldiers return to their normal human strength. You might be able to see when the general falls to his knees, that his eyes turn back to normal and his fangs and reptilian skin disappear."[5]

Lara Croft is dropped off at the Great Wall of China by a helicopter. She sets of to find the gate to the Temple of Xian, the resting place of the fabled Dagger of Xian. At the gate she is attacked by Claudio, one of the men working for Marco Bartoli, an Italian gangster also looking for the dagger. She learns that she has to look elsewhere first and an address on Claudio's laptop guides her to Via Caravelli in Venice, to the hideout of Bartoli. Arriving in Venice, Lara begins searching for Bartoli, hoping she will find the key that opens the chamber of the Dagger of Xian on him. Lara follows Bartoli's men into his hideout and reaches an opera house where she overhears a conversation. She manages to travel on board his airplane, but is soon knocked unconscious. Lara awakes weaponless and locked in, in a room on an offshore rig. She managed to flee from the room and reclaim her weapons from the plane. Making her way through the rig Lara encounters a monk, Brother Chan fighting with Bartoli's men. From him she learns that in order to find the key unlocking the Temple of Xian, which is hidden in a Tibetan monastery, she needs to find an artefact called the Seraph. This artefact was transported aboard the Maria Doria, a ship that sank at the location the rig is located at now. A race for the seraph, leading through the wreckage of the sunken ocean cruiser begins and Lara manages to get it before Bartoli's men do. She then steals the airplane to get to the Barkhang monastery. Lara needs to pull from the plane before it crashes after encountering fuel problems, and thus has to travel on foot and by snowmobile through the Foothills of Tibet to reach the monastery. Arriving there she will find that Bartoli's men were ahead of her and are attacking the monastery.

Information (as given out by Eidos)

Lara Croft returns in Tomb Raider II to discover the secret of the Dagger of Xian. The ancient Chinese believed that whoever recovered this mythical dagger would gain power beyond belief... provided they had the courage to plunge the dagger deep into their heart.

Lara's travels start at The Great Wall of China but it's not long before she's globe-trotting in hot pursuit of clues that will lead her to the ultimate goal. However she's not alone in her new adventure: this time there are other who have a seemingly fanatical interest in the dagger.

Featuring an enhanced Lara Croft, complete with costume changes, Tomb Raider II combines the classic gameplay of the original with an array of enhanced exterior settings, new moves, new weapons and a plot that'll have Lara twisting and turning around every corner. [6]

The unstoppable Lara Croft is back in TRII, complete with the classic gameplay that made Tomb Raider the game of the year! Join Lara in her quest for the Dagger of Xian, reputed to possess the power of the dragon. But beware, Lara is not the only one in search of danger! Warrior Monks and crazed cult members plot against you as you travel from the remote mountain peaks of Tibet, the canals of Venice and even to the bottom of the sea.[7]

[8] (Note: Some of the features are already known from the original Tomb Raider and the rocket launcher became a grenade launcher in-game.)

While building up upon the gameplay of Tomb Raider, Lara's weapon arsenal has expanded. A full list is below. She can do all of the same moves from Tomb Raider as well as some new ones. These include climbing, performing a 180 degree manoeuvre in the water and in mid-air while jumping. Flares have also been added to Lara's inventory. She may run with one lit, or she can throw them. Also Lara may operate vehicles in the game which include a motorboat in Venice and a snowmobile in Tibet.

Lara herself has been constructed with more polygons. Her breasts and face look much rounder than they did in Tomb Raider. Her hair actually dangles in a ponytail, rather than being tied up in a bun previously. Her ponytail sways around outside due to wind but is stationary inside, providing Lara herself is stationary.

Instead of the usual medipacks and ammunition that posed as secrets in Tomb Raider, in Tomb Raider II there are 3 secrets per level which are 3 ornamental dragons. On each level the player has an opportunity to find the stone, jade and gold dragons. Some dragons might have ammunition, weapons and medipacks that accompany them when found. Lara also has two new outfits. She wears a wetsuit for the Rig and Maria Doria levels, and she wears a bomber jacket during the levels in Tibet.

Croft Mansion has also expanded. The player may now go outside and explore the attic, kitchen and basement. An assault course and hedge maze await the player outside. The mansion serves as the game's training level where the player may practice manoeuvres on the assault course, which can also be completed whilst being timed.

(Please note that this template is obsolete. The next time you edit this article, please exchange "more" for "edit".)

In Tomb Raider II Lara will need to drive two different vehicles within the game.

There are 48 Secrets, in form of three different dragon sculptures (gold, silver and jade) hidden within 16 levels of Tomb Raider II. 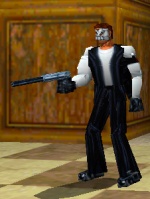 An example of an enemy in Venice

Development of Tomb Raider II was already in its conceptual stages even before the first game was released. By the time Core was wrapping up Tomb Raider, many more ideas and suggestions had been put forth, some of which could be incorporated in the first game, others which would shape up to become the next installment of the series.

While several key members of Core Design had left (most notably Lara's creator Toby Gard), the design team for Tomb Raider II was drastically expanded to more than twice of its original size. Subsequently, the game took a shorter amount of time to develop than its predecessor. The decision to keep the engine from Tomb Raider was made early on, adopting a tweak-and-improve approach, rather than starting over from scratch. Minor camera issues and object glitches were fixed, while new features were added, such as dynamic lighting and a more flexible control system. Core Design used a custom built level editor that let them explore each stage as it was being created. This allowed the designers to test play levels on the fly and eliminate glitches.