From WikiRaider
(Redirected from Laser)
Jump to: navigation, search 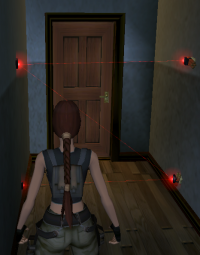 Lasers have appeared in many forms in the Tomb Raider Series, but were first used in the Military parts of the Nevada sections of Tomb Raider III, as death traps as well as an alarm trigger. Walking through one would mean death to the heroine.