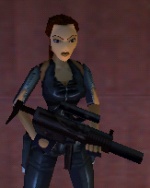 The MP5 is a Submachine Gun designed by the German firearms manufacturer Heckler & Koch, based on the G3 assault rifle, firing 9x19mm Luger/Parabellum. It is well known for it's unusual accuracy for a sub-machine gun and it's reliability, used by a wide variety of military, counter-terrorism and police forces. It is also popular in movies and games. There are also a wide variety of model types, ranging from compact Personal Defense Weapons to versions for civilian target shooting. The version used by Lara is an MP5-SD, an MP5 with an integral suppressor and collapsible stock.

Although only firing 9mm, the MP5 is considerably more powerful the than the dual pistols, Magnums, Automatic Pistols, and Uzis Lara carries in games 1-5 (only 3-6 rounds to kill a human!) It is also more accurate than most of the games' weapons, and fires fully automatic. The downside is that it cannot be used with any acrobatics. Lara lines up the sights for accurate shooting while standing still, and can fire from the hip while walking or running. Moving or stopping, however, causes a brief delay in fire while Lara re-positions the weapon. The models features in Tomb Raider 3 and Chronicles have an integral sound suppressor so that nearby enemies will not hear the report. Reloading isn't done in real time, so Lara can shoot continuously. The MP5 reappears in Chronicles, called the "HK Gun" which the player can manually aim using the sight, and choose between the three fire modes.

It can be used for long-range combat. The MP5 is one of the only weapons which can't be fired while jumping along with the M16.