Lara's Home is the training level in Tomb Raider II. 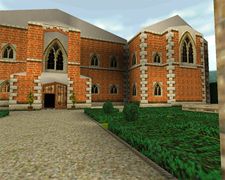 It acts as a place for players to get familiar with the controls.

New features compared to the previous Lara's Home are, for example, Winston, Lara's faithful butler, who follows her throughout the grounds, and some new rooms.

Winston does not enter the bathroom if Lara is in the bathtub. Unlike the mansion in Tomb Raider III, Lara cannot leave the mansion grounds via the main gate, as it is locked.

Lara greets the players with the words: "Welcome back. After that gruelling business last year I've decided to build this assault course to hone my skills... and learn some new ones. "

Lara's home from Tomb Raider II is more complex than in the previous Tomb Raider as it houses more rooms, including Lara's bedroom and bathroom and a secret treasure room in the basement, containing several artefacts from the previous game. A timed outside Assault Course includes a zipline and water elements.

To the right of the front gate there is a hedge maze and, at the end of it, an area with two Incan statues, a box of flares and a button that opens the timed door to the secret treasure room.

The mansion also contains a kitchen with a freezer where Lara keeps food. The freezer door is opened and closed with the push of a button located outside the freezer. Fans of the game have discovered that Lara's butler can be locked inside the freezer as he moves slowly. The same can be done with the final boss in Home Sweet Home.

Next to the kitchen, where Lara's original indoor assault course was located, there is a large ball room complete with a stereo that plays the "Venice Violins" song.

The pool room is almost unchanged, except for the wall colours and the diver at the pool.

There were rumors that the closed rooms from the first floor would open if the assault course is finished in an absurd short amount of time. The rumors are fake, unfortunately.

The roof of the mansion can be reached by preforming the Cornerbug. Lara gradually goes inside the corner front of the house and the machine rejects her, sending Lara to the nearest possible surface, the roof.

The record for the shortest time of completion of the course is 1:03:9, by Wolff Morrow.