From WikiRaider
(Redirected from Cornerbug)
Jump to: navigation, search 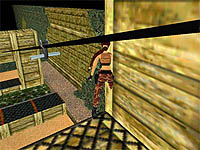 Preparing Lara for the Corner Bug

The Corner Bug (or Corner Jump) is one of the useful bugs.

This will only work if there is enough space on top of the wall for Lara to stand up straight.