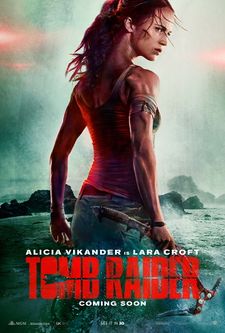 Tomb Raider is the title of the third Movie, starring Oscar winning actress Alicia Vikander. It was release on 15 March 2018[1].

Filming for Tomb Raider started on 23 January 2017 in South Africa and moved to the UK in March/April. The film was directed by Norwegian director Roar Uthaug[2]. Principal photography ended on 9 June 2017[3] and the movie entered the post production stage. The official movie poster as well as a short teaser trailer were released on 18 September 2017, the full trailer one day later on 19/20 September. A second trailer was released on 18 January 2018, followed by two 30 sec. TV spots called "Begins" and "Adventure" on 22 January 2018.

The new movie project was announced in April 2016[4]. It was made by Metro-Goldwyn-Mayer and Warner Bros. - unlike the previous instalments that were created by Paramount -, and produced by Graham King's GK Films.

During the first half of March 2018 the film was shown at several preview screenings around the world, e.g. at the Astor in Berlin on 2 March.

The story of the third Tomb Raider movie is centred around a young and inexperienced Lara Croft and set in the Tomb Raider Reboot universe.

Lara Croft is the fiercely independent daughter of an eccentric adventurer who vanished when she was scarcely a teen.  Now a young woman of 21 without any real focus or purpose, Lara navigates the chaotic streets of trendy East London as a bike courier, barely making the rent, and takes college courses, rarely making it to class.  Determined to forge her own path, she refuses to take the reins of her father’s global empire just as staunchly as she rejects the idea that he’s truly gone.  Advised to face the facts and move forward after seven years without him, even Lara can’t understand what drives her to finally solve the puzzle of his mysterious death.

Going explicitly against his final wishes, she leaves everything she knows behind in search of her dad’s last-known destination: a fabled tomb on a mythical island that might be somewhere off the coast of Japan.  But her mission will not be an easy one; just reaching the island will be extremely treacherous.  Suddenly, the stakes couldn’t be higher for Lara, who—against the odds and armed with only her sharp mind, blind faith and inherently stubborn spirit—must learn to push herself beyond her limits as she journeys into the unknown.  If she survives this perilous adventure, it could be the making of her, earning her the name tomb raider.
official release

The games never mentioned Lara working as a bike courier, although stills of her London flat show that getting around on bike is something she does. In a conversation with her mentor Conrad Roth, shown in the Reboot Game it was revealed, that Lara worked in a pub.

It was also never mentioned in the game that her father ran a global company, instead it was insinuated that he earned his money only through archaeological research, although this still seems to be at least a hobby of his:

Lara Croft sets out on her first expedition to finish her father's archaeological research and uncover ancient secrets in order to clear his disgraced name. Tragedy hits when her adventure turns into a fight for survival.
IMDb Page

In the film, Lara admits that she never visited an university. Lara Croft from the games definitely did go to college. In the reboot games it was mentioned that she met Samantha Nishimura there.

Note: The following list is compiled from the IMDb[5] and may not be complete.

The official soundtrack is available since the movie's release. There are 14 Tracks of the musical score included:

Furthermore, two songs were expected to be part of it before, but were excluded from the CD:

Background music of the second trailer

At first Tomb Raider was rumoured to be filmed in Queensland, Australia.[6], but the set was moved to the vicinity of Capetown, South Africa and shooting began there in early 2017. Later that year filming moved to the United Kingdom.

On 22 November 2016 a YouTube video featuring a short interview with Graham King, the producer of the film, appeared. In it he confirmed that this will in fact be a "back to the roots story" featuring a young Lara Croft, who is trying to find out if "her father is dead or alive"[8].

The movie's status was updated from "in pre-production" to "filming" on IMDb in January 2017, while first images from the set appeared on Twitter and Instagram[9] as well as community fan sites[10].

Disclaimer: Some of these pictures were provided by Warner Bros.

Rumours concerning Tomb Raider Movie 3 - which has been the codename the community has used for all of the rumoured 3rd Tomb Raider Movies, including those featuring an origins storyline - have been around for as long as the mid 2000s, starting shortly after the second Angelina Jolie movie (The Cradle of Life) was released in 2003. All these projects mentioned in this section - which supposedly were planned before the announcement of the 2018 release - never left the planning stages. Thus all information in this section should be treated as rumours that were never officially confirmed (except where noted otherwise)! The list is in reverse order, starting with the latest rumour first:

After a lot of speculation during the previous years, it was finally announced that a third movie was currently being planned. The rights for the movie were sold to Graham King's GK Films and that they were aiming for a movie with an Origins-storyline and a release in 2013.[11]

After the huge success of Tomb Raider Legend a 3rd movie seemed likely. It however was never realized. In an interview on August 16th 2006 with Eurogamer Ian Livingstone said:

We're also talking to Paramount about a third movie, although nothing's been signed yet and we still need to hire a script writer. The film's not been green lit yet, so for me it'd be ideal to tie in a movie script with a game script at the same time, to have them both in harmony rather than out of kilter - which has happened in the past.
Ian Livingstone[12]