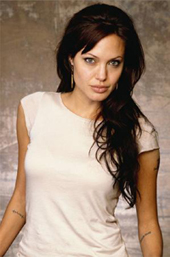 Angelina Jolie (born June 4, 1975 in Los Angeles, California) is an American film actress, a former fashion model, and a Goodwill Ambassador for the UN Refugee Agency. She is the winner of three Golden Globe Awards, two Screen Actors Guild Awards, and an Academy Award (1999, Best Supporting Actress Oscar for her role as Lisa Rowe in "Girl, Interrupted"). She portrayed Lara Croft in Lara Croft: Tomb Raider alongside her father, Jon Voight. Angelina again took the leading role of Lara Croft in 2003, in The Cradle of Life. 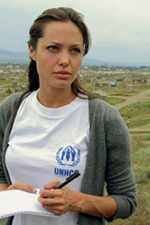 Angelina is often cited by the media as one of the world's most beautiful women and her off-screen life is widely reported. She currently lives with actor Brad Pitt, and they have three adopted children, Maddox from Cambodia, Zahara from Ethiopia, and Pax from Vietnam, as well as one biological child, Shiloh.

While filming Tomb Raider in poverty-stricken Cambodia, Jolie became personally aware of worldwide humanitarian crises. She has travelled to different refugee camps around the world and has donated millions. UNHCR named her a Goodwill Ambassador on August 27, 2001 at UNHCR headquarters in Geneva.

Her Role As Lara Croft 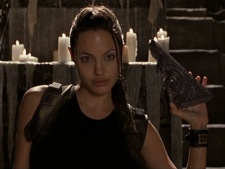 In 2001 Angelina took up the role of Lara Croft in a movie that was a huge international success, earning $275 million worldwide, and started her reputation as a female action star. "Angelina Jolie was born to play Lara Croft." Jolie reprised her role as Lara Croft in Tomb Raider: The Cradle of Life in 2003. The sequel, while not as lucrative as the original, earned $156 million at the international box-office.

The casting of Jolie was controversial among many fans of the Tomb Raider series, who felt she was physically inappropriate to play the heroine; others complained about an American actress being hired to play a British character. Before Jolie had the role, a number of other actresses were waiting for the part. 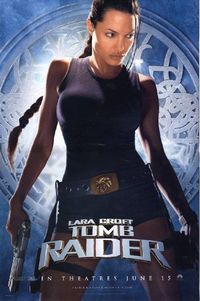