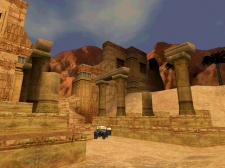 The Karnak Section is the third section in Tomb Raider IV: The Last Revelation. It follows the Valley of Kings Section. The location of this section is the Temple of Karnak complex in Egypt.

The section consists of six levels, the first three of which are connected with each other, and have each to be visited at least twice in turn to fulfil all tasks. If Lara misses anything she might have to pay them more than two visits.

Lara is wearing her regular Classic Outfit in this section.

These enemies are mainly encountered in the outdoor areas around the Karnak temple.

The bats lurk in dark corners of the Karnak temple and inside Semerkhet's tomb.

These two types of desert warriors can be found throughout the temple complex.

The crocodiles can be found around the sacred lake.

The scarabs, which will occur in large groups are found inside Semerkhet's tomb.

These animals are found within Semerkhet's tomb.

These two ghosts are found within Semerkhet's tomb. They will battle each other if released at the same time.

A large mythical bull that cannot be killed and must be evaded.

The wall mounted fire emitters often contain triggers within the Tomb of Semerkhet level. Lara has to quickly grab inside while the fire is off.

This round device with blades, which usually blocks a passage, had to be overcome by a well timed jump or a 180 degrees roll.