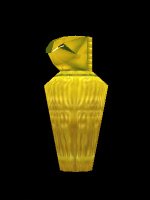 In ancient Egypt a Canopic Jar was a vessel used in the mummification process. It was used to store the internal organs (heart, brain, liver, etc) of the deceased in order to preserve them for the afterlife where he or she would be reunited with them.

Two such Canopic Jars can be found in Tomb Raider IV: The Last Revelation, in the Karnak Section of the game. The first is located in the Temple of Karnak level. It is then used to open the passage to the Sacred Lake, where the second vase is located.

The first Canopic Jar is located in the Temple of Karnak level. It is used to open the passage to the Sacred Lake.

The second jar is hidden in the Sacred Lake level. When placed correctly, it unlocks the mystical spring, which allows Lara to walk across a lake into which the spring flows.

Canopic Jars in Lara Croft and the Temple of Osiris

Canopic Jars (ToO) can also be found in Lara Croft and the Temple of Osiris. Here they contain body parts of Osiris and the player has to collect all of them in order to defeat Set, the God of the underworld. Also, the player can find Canopic Jars left behind by other players (PlayStation Network friends) have died.