Crystal Dynamics was founded in Menlo Park, California in 1992 and became a wholly owned subsidiary of Eidos in September 1998. The studio develops software for console - like e.g. the Xbox and PlayStation series - and PC, and has established an enviable track record for its famous Legacy of Kain franchise.

Since July 2003, Crystal Dynamics has been responsible for the further development of the hugely successful Tomb Raider series, starting with Lara Croft Tomb Raider: Legend in 2006.

In 2009 Eidos (and Crystal Dynamics with it) was taken over by Square Enix, which released the successful reboot of the franchise.

Note: The Lara Croft titled games feature a completely different isometric game play. They are meant to be fill-in games to bridge the long wait between the releases of the games of the Tomb Raider Series, which take longer nowadays because of increased developing time. 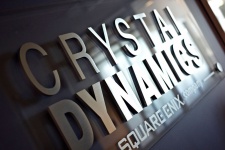