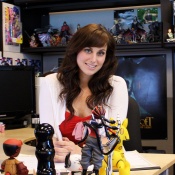 Meagan Marie (full name Meagan Marie VanBurkleo) is the Community & Communication Manager at Crystal Dynamics since 2011. Before that she was an Associate Editor for Game Informer magazine.

Meagan has been a gamer before getting a job in the gaming industry and claims that "Tomb Raider was the first game I took ownership over".

As part of her job she travels a lot and visits Community Events or trade shows like E3 or GamesCom to promote new games like Tomb Raider (2013) all around the world.

Meagan Marie is also widely known for her Cosplay. Besides Lara Croft she has been impersonating several other video gaming and other popular pop-culture characters.

In 2016 Meagan Marie announced during a panel at PAX East she was writing a book called "20 Years of Tomb Raider" that was to be released later the same year. It will feature images and background information on the Tomb Raider franchise and fan base.

Currently (Aug 2018) she is writing a book about influential female role models in the gaming industry called Women in Games: 100 Pioneers of Play with a foreword by Jen MacLean[1].