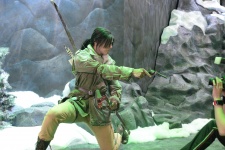 Cosplay (short for costume play[1]), previously often called Lookalikes, is a type of performance art whose participants outfit themselves, with often-elaborate costumes and accessories, as a specific character. Cosplayers often perform at conventions such as E3 or Gamescom where there ae sometimes opprtunities for other fans to take pictures with them.

In the case of Tomb Raider the character is usually Lara Croft and the cosplayers are usually female.