A Supply Drop is a way to get more Coins, Resurrection Ankhs, Gems, or other gear in Lara Croft: Relic Run. 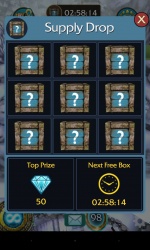 Since version 1.8.88 the Supply Drop has been made into a mini game. Every three hours the player can choose from nine boxes that have been randomly shuffled. Before shuffling the prizes are shortly shown and then hidden inside blue crates. One of these contain 50 Gems as the main prize.

However, finding the box containing 50 Gems proves complicated. If the player pays a certain amount of Gems he or she can open up to two additional boxes to claim more prizes. However, after the third box the set is reshuffled.

In addition to the Supply Drop a new Daily Prize has been introduced where the player can claim one of the nine items once every 24 hours. As there is no countdown for this, one has to remember this prize without any further reminders or notifications.

From the ninth day onward the prize is always the same: 10 Gems. Before that one can claim the following items:

The Daily Prize can be claimed when leaving the in-game store. If it does not show up, one has to retry later on, since the 24 hours since the last prize have probably not elapsed yet.

Additionally, five free gems can be claimed about twice a day when leaving the Purchase Gems screen in the store; the exact interval is unknown and it might include some randomization. The game will ask if the player wants to watch a short advertisement video, after which the gems are added to the player's inventory. (See image below in gallery.)

Note that there are two different screens from which one can purchase gems: The first one can be accessed by clicking the Store icon on the main screen, while the second can be accessed by clicking on the Coins and Gems count on the top of the store screen or the Supply Drop pop-up respectively, which can be difficult to do on small displays. These two screens can be distinguished by the big "Store" banner on top with the four "Gems", "Gear", "Weapons", and "Outfits" buttons underneath for the regular store, which is missing from the second version of the "Purchase Gems" dialogue.

Before version 1.8.88 of the game, a Supply Drop occurred every six hours after collecting the last drop. A supply drop usually occurred after a run. The type and amount of items dropped was random.

Sometimes one could watch an advertisement video to get a supply drop earlier. (Confirmed on Android tabs and phones with versions 1.5.68.)