Remark: This article describes the Coins found in Coin Trails in Lara Croft: Relic Run. For information about the currency in Rise of the Tomb Raider, see Byzantine Coins. For the item found in Quest for Cinnabar, see Bronze Coins. 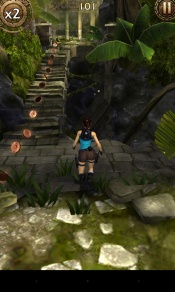 Coin Trail Made of Bronze Coins

Coins are the currency in Lara Croft: Relic Run. While traversing the ruins Lara can collect coins that she can later spend in the in-game store to purchase new Weapons and Upgrades. There are different kinds of coins with different values: bronze, silver, and gold coins, with gold coins worth the most.

Coins can also be found in Coin Crates. These are located in background of the combat sequences; e.g. in the Jungle Temple Level one has to shoot them while simultaneously fighting off Lizard Men.