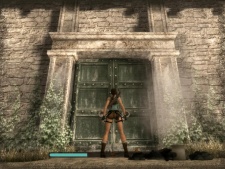 The Greece Section is the second of the four sections in Tomb Raider Anniversary.

The section takes place in Greece and consists of remakes of the levels of the original Tomb Raider.

After infiltrating the Natla Tecnologies Headquarters, Lara finds out the location to where she must go next in order to find the second piece of the Scion - St. Francis Folly. Unfortunately Pierre Dupont, a rival archaeologist, is already there. Race for the Scion piece begins, and continues through the Folly, The Coliseum and all the way to the mystical Midas' Palace, ending finally in the Tomb of Tihocan.

But reaching the Tomb of Tihocan is not easy. Lara must face dangerous enemies, solve many puzzles and make her way through traps and obstacles.