The Ahmet (also known as Ammit and under many other names) is an opponent first appearing in Tomb Raider The Last Revelation and returning in Lara Croft and the Temple of Osiris. They can also be regularly found within Custom Levels.

The Ahmet is a demoness from the Egyptian netherworld. It is usually depicted with the head of a crocodile, the foreparts of a panther (with a lion's mane) and the back of a hippopotamus.

The hearts of the dead were weighed against the feather of Ma'at. Those that weighed more because of their evil deeds and therefore were unfit for the afterlife were consumed by Ahmet.

You will encounter them in the level Temple of Horus, but unless you make a mistake in the Scales Riddle, they stay in their cage.

The Ahmet is also a popular baddy in a lot of Custom Levels.

In Lara Croft and the Temple of Osiris this creature will make its return, this time under the name Ammit.

The Ahmet is a powerful creature, so you are well advised in using a better weapon. In the original game you can avoid contact if you get the Scales Riddle right. 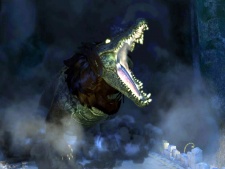 The first encounter with Ammit is at the end of the Pyramid of Osiris level. Lara's only option is to run and not to fall down through any gaps in the walkway.

Other names commonly used for the creature