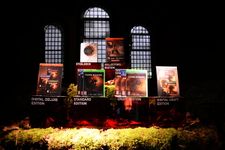 The London event was held at the Welsh Chapel in Shaftesbury Ave., which was decorated in an Mexican Día de Muertos style. After an introduction by the attending developers the demo was playable. As a special guest Alison Carroll was also in attendance.

On the following day a Community Dinner was held by Meagan Marie.