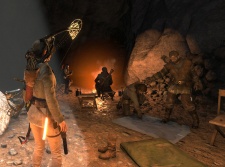 The Remnant Scout (Right) and His Men

The Remnant Scout is another source of Missions in the Soviet Installation of Rise of the Tomb Raider besides the Remnant General. Lara meets him for the first time in the level Alone Again after he and his men have been attacked and wounded by Trinity soldiers.

Like many of his fellow Remnant the Scout wears a brown leather jacket, as well as matching trousers and boots, presumably made from deer Hide. He has a quiver and two daggers on his belt. His hair is brown and he wears a beard.

His name is not mentioned in the game, but he is identified as the Remnant Scout in the Missions.

When Lara finds the wounded Scout and his men he asks her to clear out an animal den where a pack of Wolves hide so he can hide there.