From WikiRaider
(Redirected from Legend Outfit)
Jump to: navigation, search 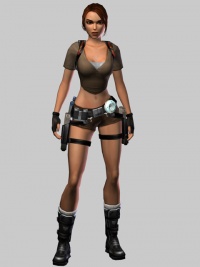 In Tomb Raider Anniversary the Standard Expedition Gear can be unlocked by collecting one of the two relics in Peru. This one relic can either be the Kero Mug or the Killer Whale Bottle.

From the official Site

Lara's standard expedition gear is comfortable and practical for most situation and environments. It's constructed of the highest quality materials for durability under harsh conditions. [1]