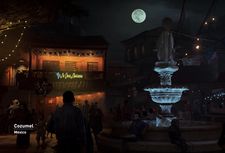 La Casa Mexicana is the restaurant in Cozumel, Mexico where Lara Croft and Jonah Maiava meet in Shadow of the Tomb Raider. They come here after escaping the explosion inside the tomb where they have found new clues to the resting place of the Key of Chak Chel and the Silver Box of Ix Chel.

The restaurant is a two story building with a neon sign that reads "La Casa Mexicana" and a cactus in front of it. Lara and Jonah meet on the upper balcony and have a beer while discussing their findings. When they overhear a Trinity mercenary telling Dr. Dominguez that "they found it", they assume it is the Key of Chak Chel and Lara follows Dr. Dominguez through town.

La Casa Mexicana is presumably destroyed by the same Tsunami that later on also destroys the rest of Cozumel.