From WikiRaider
(Redirected from Jaqueline Natla)
Jump to: navigation, search

Jacqueline Natla is a character in the original Tomb Raider, its remake Tomb Raider Anniversary and Tomb Raider Underworld.

Natla was one of the three legendary Rulers of Atlantis, along with Tihocan and Qualopec. Together they created the Scion, a device of immeasurable power. This device was split into three parts, one for each of the rulers, representing the ruling structure that Atlantis was governed by.

Collect 41 artefacts in Anniversary and the following biography is unlocked: 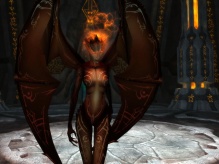 During the final level of Tomb Raider Legend, Bolivia - The Looking Glass crates can be seen with the Natla Industries logo. The boxes were thought to be an Easter Egg. However, in Tomb Raider Underworld it is revealed that Amanda has a corporal relationship with Natla.

Natla, held prisoner on Amanda's ship, has a reunion with Lara.

Jacqueline Natla returns in Tomb Raider Underworld, held prisoner in a glass tube on a freighter ship by Amanda Evert. Early in the game she tells Lara about Helheim and Avalon being one and the same and informs Lara that she needs Thor's relics to gain access. After visiting Jan Mayen Island to retrieve Thor's Hammer, Lara sets off to the Andaman Sea on the coast of Thailand to find Amanda's ship again. Lara confronts and threatens to kill Natla, but is stopped when Natla explains that a ritual is also needed to open the gates of Helheim; a ritual that only Natla knows. Realising she has no choice if she wants to enter Helheim and find her mother, Lara then smashes the capsule open, allowing Natla to escape. After arriving at Avalon, Natla reveals that she was manipulating Lara to reach an ancient device called the Midgard Serpent to bring about the Seventh Age. She also claims that she killed Lara's father in Thailand after he betrayed her. Lara manages to destroy the Midgard Serpent, and then knocks Natla into the Eitr surrounding the device by throwing Thor's Hammer at her.

Natla was the Immortal Queen of Atlantis, and more recently CEO of Natla Technologies. Somehow she lost her connection with the powerful artifacts of her reign millenia ago, and recently began devoting her knowledge and intellect toward recovering it all from ancient sites around the world. Her aim is to initiate what she calls The Seventh Age, of which I know nothing other than that it would be a very bad turn for humanity. I buried her on a remote island, but apparently Amanda has dug her out and is keeping her prisoner as her own personal Encyclopaedia Atlantica. I hope Amanda understands that she's sitting on a time bomb, and that everything Natla tells her is filtered by her own agenda.
Lara's journal [1]

In Beneath the Ashes & Lara's Shadow

Main articles: Beneath the Ashes Story and Lara's Shadow Story

In the second cutscene of Lara's Shadow, the Doppelgänger comes across Natla in Helheim; Natla has suffered severe injuries, presumably from Thor's Hammer and from immersion in the Eitr. Using the words "Ohk Ehsivar" Natla orders the Doppelgänger to help her back to the pod device that the Doppelganger was created in. Natla then instructs her to reactivate the pod and waits slumped inside, presumably waiting for some regeneration process to begin. She gives the Doppelgänger some final orders, namely to kill Lara and then to commit suicide, the latter appearing to disconcert the Doppelgänger somewhat. Four days later beneath the Croft Manor (see Beneath the Ashes) Lara somehow frees the Doppelgänger from the control of the magic words Okh Eshivar and suggests that the newly independent Doppelgänger should "make Natla suffer". The Doppelgänger returns to Helheim and turns Natla's pod device off. Natla falls to the ground, gets crushed underneath some rocks and finally is left lying in a pool of Eitr. When the Doppelgänger approaches, Natla again orders her to help. However the Doppelgänger thinks back to what Lara has told her - "You are no longer a slave" (we see a flashback) - and does not obey. Natla realizes she is in trouble and calls for the Thralls to save her, but they don't show up. Natla screams and presumably dies. We see a close-up of the Doppelgänger's face: she smiles.

An updated version of the doppelgänger created by Jacqueline Natla

Series of posts in the internet that were posted on Tomb Raider forums in January 2009. The poster claimed to be Eric Lindström, the former Creative Director at Crystal Dynamics

In the original novel, Ayesha is to a great extent selfish and amoral, caring very little for the feelings or even the lives of others so long as she gets what she wants. However, it is evident that, in the course of writing the novel, Haggard moved away from a purer conception of feminine evil. Indeed, one sees the process of transition fossilized in this sentence from the chapter entitled “Ayesha Unveils” - "I have heard of the beauty of celestial beings, now I saw it; only this beauty, with all its awful loveliness and purity, was evil — at least, at the time, it struck me as evil.