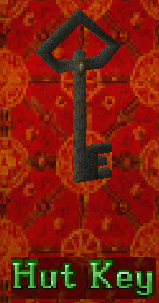 The Hut Key is a key discovered in the level Tibetan Foothills in Tomb Raider II.

It is found once Lara has started an avalanche, which breaks the ice at the foot of the ice cavern. In the now cracked ice waits the Hut Key, but once approached, a Snowmobiler with dangerous machine guns on his snowmobile appears through the entrance to this cavern.

It can be best to park Lara's snowmobile near the key as she claims it, so then she can quickly run away on it as the snowmobiler comes into the cavern. He drops nothing if you do kill him with guns, and you can't take his armed snowmobile as it's too heavy to make it over the big jump on the way back.

Fighting against this snowmobiler can be deadly, as he can either run Lara over or shoot her to pieces.

The Hut Key unlocks the hut seen at the level start.