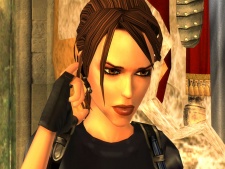 A Headset belongs to Lara's gear in the VCI Section of Tomb Raider Chronicles and in Tomb Raider Legend.

It serves as an important device in Tomb Raider Chronicles: without it, it wouldn't be possible to locate invisible, lethal lasers in some parts of the VCI Section. Zip also provides hints and tips, alongside with witty comments, via the Headset during the levels.

Via the Headset, in Tomb Raider Legend, Lara is able to communicate with Zip and Alister back at the Mansion and allows them to see what ever she encounters via a tiny camera mounted on the headset. This device cannot be switched on or off.

The Headset returns in the Tomb Raider Underworld Add-on Beneath the Ashes. While she uses a regular mobile phone to communicate with Zip in the regular game, the Xbox 360 exclusive level sees her returning to an ear-attached version with integrated camera through which Zip keeps Lara updated and acts as a silent observer.

A similar device also appears in the Cradle of Life film, but features a flip-out video screen as well.

In the VCI Section of Tomb Raider Chronicles the Headset can be used as the binoculars and it can be used to see infrared when the player hits the Action button. The infrared light is useful to see lasers that cannot be spotted with the naked eye. Zip also communicates with Lara via the Headset.

In Tomb Raider Legend her tech-team, Zip and Alister, use the headset to supply Lara with valuable information and nonsense.

From the Official Site

Lara's hi-tech, advanced eyes and ears. Her headset keeps her in tough with Zip and Alister back at the Mansion and allows them to see what she sees and communicate with her.[1]