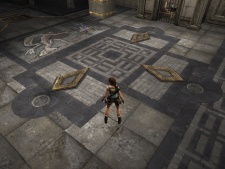 The spots for the movable statues, pedestal with the Key of Hephaestus and the hammer's pressure plate

The Haephestos Riddle (also Hephaestus Riddle) is a two-part puzzle found in Tomb Raider Anniversary, in the level Greece - St. Francis Folly. After completing the riddle Lara is able to obtain the Key of Hephaestus.

The first part of the puzzle has a room with a ball that shoots lightning bolts in the ceiling. The floor consists of sets of tiles that move up and down. There are also four pressure plates on the floor, they can be recognized easily since they're slightly raised from the rest of the tiles.

After succesfully pressing all the plates Lara can enter the main room where the second part of the puzzle waits. In the middle of the room there are three spots on the floor and near them there's a movable statue. The spots are meant for movable statues like this one. To get two more, Lara has to break two movable blocks. First one breaks with the help of the big hammer. Pushing a movable block to the pressure plate under the hammer causes the hammer to come down and break the block. The last statue is created by dropping a block to the floor over the ledge where it's situated on the upper part of floor. To get there, Lara has to use the hammer. She has to step to the pressure plate and then quickly get out of the way as the hammer comes down. Grabbing the metal plate that goes around the hammer takes Lara up, and by jumping off as the hammer goes up she lands to a platform. From there she's able to get to the last movable block.

Now as there are three movable statues, they have to be pushed to their spots and turned so that they face the center of the room. There are arrow-like marks on the floor that serve as a hint to where the statues have to be facing. As the statues are correctly positioned, the pressure plate under the hammer changes and now when the hammer comes down the door guarding the Key of Hephaestus opens. To get the hammer down, Lara has to trick the hammer down for the last time by stepping to the pressure plate.