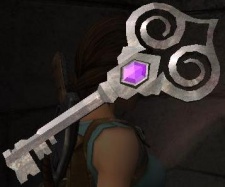 The Key of Hephaestus is a key found in the level Greece - St. Francis Folly, in Tomb Raider Anniversary. It has a light violet gem. The Key is found in the room dedicated to the god of fire and blacksmiths, Hephaestus.

To reach the key Lara must first pass a lightning trap and lower the gate leading to the main room. This is done by stepping to all four pressure plates that are slighlty raised. The other parts of floor keep raising and lowering, and the lightning bolts only strike to the raised parts of the floor, but of course not to the pressure plates.

After succesfully opening the gate, Lara enters to the main room. There's a huge hammer and a movable statue, and a movable, grey block. On the upper parts of the room there's another movable block. If Lara steps on to the pressure plate below the hammer, it'll come down and crush her if she doesn't get out of the way quickly enough.

On the floor, there are three spots. Lara must get three statues, and push them to their spots and, if necessary, turn them so that they're facing the center. There are arrow-like marks on the floor indicating the direction that the statues should be facing. Lara should push the movable block on to the pressure plate under the hammer and it'll turn into a statue, which can be then moved to its place. Then, to reach the block that's situated in the upper part of the room, Lara can use the hammer. First stepping to the pressure plate makes it come down, but instead of getting crushed, Lara must jump and grab the metal band that goes around the hammer.

As the hammer goes up again, Lara can jump to a platform and travel to the block. Pushing the block over the ledge makes it break and turn to a similar statue as the two others. As the statues are in their places, the pressure plate changes. Now, as Lara steps to it and tricks the hammer to come down, the gate in front of the little alcove that has they key on a pedestal lowers.