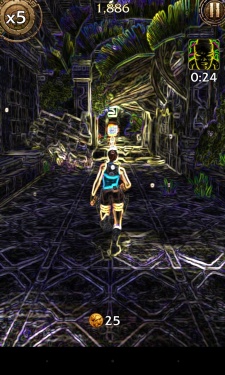 Curses are a part of the Social Gaming in Lara Croft: Relic Run. After connecting the game to Facebook the player is able to send curses to friends. These distort the screen of the recipient in order to make the game harder to complete. After a certain amount of time the screen turns back to normal if the curse is survived and a reward in Coins is awarded at the end of the run. If Lara does not survive it, the player that send the curse gets the reward.

The target's vision narrows to only a small view on the world.
Cost: 700 Coins

The target will suffer severe vertigo, distorting their view of the world.
Cost: 875 Coins

Target finds themselves in a recording that has been played back too many times.
Cost: 700 Coins