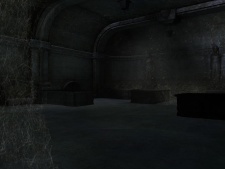 The Croft Family Crypt was revealed to exist in Tomb Raider Underworld and it was again seen in Rise of the Tomb Raider.

The Croft Family Crypt is a room hidden behind a secret door in the wall of the Tech Room where the late members of the Croft family have their final resting place.

Lara finds out in Thailand that her father hid the second gauntlet of Thor in the Croft Manor. More precisely, in a secret area underneath his father's, Lara's grandfather's, tomb. Zip and Alister are both shocked when they find out that there's been a crypt right next to them all along. However, the two of them and Winston accompany Lara when she enters the crypt to look for a tiny switch on her grandfather's tomb that reveals the secret passageway below.

In Rise of the Tomb Raider, as part of the rebooted storyline, we see a different family crypt, one where Lara's mother Amelia Croft has been laid to rest here, after her demise in the Himalayas, when her plane crashed on the way to Tibet.

The crypt is located behind a secret panel on the landing of the main staircase.