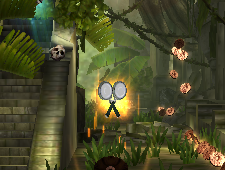 The Clue Booster is a Powerup in Lara Croft: Relic Run. Once collected the Clues collected count twice, meaning that Lara has to collect fewer clues to find a Relic.

Before update 1.5.68 the Clue Booster could be upgraded four times; the amount of clue boost was up to four times the normal amount. After the update this has been replaced with a 10 part progress bar. Upgrading the clue booster now only lengthen it's duration.

Wearing the Bomber Pilot Outfit gives an additional 15 seconds of Clue Boost. Additionally the Clue Booster can be upgraded in the store by spending Coins or Gems.

The following reason for adding it to the list has been given: Costs for upgrades missing because they were already unlocked in my savegame. Further reasons might be found on the "discussion page". --Wile E. Coyote (talk) 10:33, 15 October 2015 (CEST)

(This notice may only be removed by the Admin.)

The first four updates can be bought with coins, all other upgrades cost gems.

Note: 2x means "in addition to the the 1x without Clue Boost", so actually every collected clue is three times as powerful. The same goes for 3x and 4x.