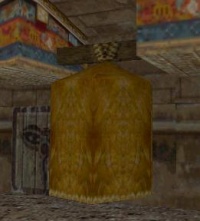 Bells can be fond in many of the games. They always have a similar function. Lara has to shoot at them or ram an object into them to trigger a certain event e.g. opening a door or confusing an opponent.

The first time bells are found is in Tomb Raider II.

The next time a bell is found within a Tomb Raider game is in Lara Croft Tomb Raider: Legend.

The first time a bell is found in Tomb Raider (2013) is within Himiko's Tomb during the level Another Fine Mess, in the Chasm Monastery region. This bell is wrapped in rope and can be used to break through the portal by using the Bow and Rope Arrows on it.

Part of the Challenge For Whom the Bell Tolls