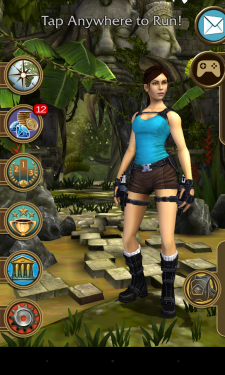 After playing the game for some while now it is time for a short review.

Lara Croft: Relic Run is a very simple but nonetheless captivating and action laden game. One has to simply help Lara avoid obstacles on her way through the levels by swiping on the touch screen of the phone. That's it, mostly. Well, there are some combat sequences, but that's also mostly point and click. Sound simple? Weeeeell...

This is the first Action Runner game I ever played. I skipped the whole Temple Run craze. So, to get into the game was a bit tricky for me. It's actually not as simple as it sounds to react correctly every single time something crops up in Lara's path. There are columns and trees one has to simply jump over or slide under, there are Wall Runs, there are vehicles like the ATV... It takes some time to learn to recognize all the different situations Lara gets thrown into.

But once I did it suddenly became addictive and I couldn't stop playing!

The premise of the game is told in less than a minute: Fellow treasure hunter Carter Bell, who we already know from Lara Croft and the Temple of Osiris got lost while on an expedition. Lara now has to search for Clues that will lead to Relics Carter left behind to hint at his current location.

That is where the player comes in: First you swipe your way through the Jungle Temple level in Cambodia looking for pages from Carter's map, lost Binoculars, and all the relics like the Tyrannosaurus Rex Skull. Speaking of the T-Rex: You will never forget the first time Lara gets eaten by this giant prehistoric saurian!

When you finally have found 15 Relics you are allowed to move on to the Desert Ruins level that will confront you with a lot of new situations and moves you'll have to learn. And there is even a third level already announced prominently in the level selection called Mountain Pass. It looks like the fun will be going on for a while and that future updates will bring more and more exciting levels!

And the best thing is: The game is Free To Play. If you want you can spent your hard earned money on gear, weapons, and outfits, but as far as I can tell you don't have to if you are patient and persistent.

So, to sum it up: It's a really good game that one can play for hours on a big Tablet PC or just a few minutes on a Smartphone on the bus home. It is fun and it has a lot of features that long time Tomb Raiders will recognize immediately. Some smaller bugs and performance problems have been solved with the first update, at least for my Android devices. Your phone has to be fairly new, though, or else you will run into some serious lagging (and consequently the wall).