From WikiRaider
(Redirected from ATV)
Jump to: navigation, search 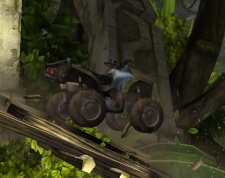 Lara will have to use it at two occasions. In India in the level River Ganges and in Nevada.

One of the most encountered questions for Tomb Raider III is How do I get off the quadbike?. The answer is, you press the roll button (PC: End PS: Circle) and left or right to leave the vehicle in that direction.

Lara will be riding the ATV throughout levels in the Jungle Temple section. She finds it on a wooden scaffolding. Lara automatically shoots the supporting beams while passing it by. The ATV will then roll down in front of her and she gets on it.

The ATV sequence ends when Lara reaches a certain point above a cliff after passing through a dense patch of plants: she jumps off - again without the player having to interfere - and the ATV will crash in the depth of the jungle below.

The ATV can be manoeuvred just as Lara in the rest of the game by swiping left and right (to change lanes) and down (to duck under obstacles). She can not jump while on the ATV. Hitting any obstacle will result in Lara's death. The ATV is quite fast so the player has to react very quickly.

While on on the ATV there are cut scenes in which Lara performs stunts like rolling sideways in mid air. These sequences can not be influenced or interrupted. The counter of Power Ups is halted during these sequences.

The Biker Outfit halts the Multiplier Decay while travelling on any vehicle.