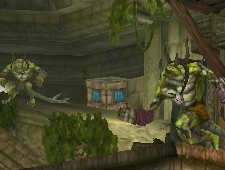 Ammo Crates are located in the background of the combat sequences in Lara Croft: Relic Run as soon as the player has purchased and equipped his or her first Secondary Weapon. For example in the Jungle Temple level Lara has to shoot them while simultaneously fighting off the Lizard Men who will throw back their spears trying to kill Lara; she has to be very careful not to get hit while aiming at these background crates. When Lara manages to shoot these crates she gains the Ammo contained within.

Additionally there are Health Crates located in these sequences which - when shot - fill Lara's Health Bar, as well as Coin Crates which contain Coins, the in-game currency.