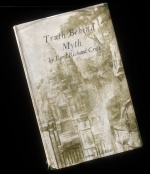 Truth Behind Myth is one of the Relics found in the Rise of the Tomb Raider DLC Blood Ties, in Croft Manor. This relic, which belongs to the set Lord Croft's Belongings, can be found in a cupboard in Lord Croft's Study.

It is a book about immortality myths, written by Lara's father Lord Richard Croft, published by Osiris Publications. The book is green with a white dust jacket. The copy Lara find's in her father's study is filled with numerous yellow post-its. A copy of this book can earlier be seen in Lara's London flat, on her desk as part of the research she does into the immortality legends.

Dad's book about immortality myths... might be useful in my research.
in-game information

Richard Croft explores myth in search of lost truths within Christianity. The word myth rests on a historical basis. By the time of Christ, the Greeco-Roman world had started to use the term myth (Greek muthos) to mean "fable, fiction, lie"; as a result, the early Christian theologians used "myth" in this sense. Thus, the derogatory meaning of the word "myth" is the traditional Christian meaning, and the expression "Christian mythology", as used in academic discourse, may offend Christians for this reason.