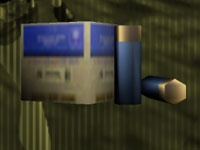 Shotgun Wideshot Ammo as it appears in the inventory in Chronicles

Shotgun Wideshot Ammo is an Ammunition type for the shotgun found in Tomb Raider Chronicles.

Wideshot ammo is for more powerful attacks. It is also effective against multiple enemies at once. As ammo is scarce Lara should save it for bosses and more powerful, or large groups of opponents, instead of wasting it killing regular enemies.

The best opportunity to use the wideshot advantage is against the Serpent Gargoyles in Trajan's Markets.

The first wideshot ammo is found in the Streets of Rome, on a stack of wooden crates.