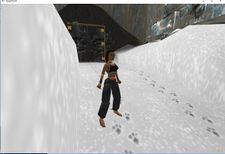 OpenTomb is an Open Source project aiming to recreate the Classic Tomb Raider engine. It is cross platform, aiming for usability not only with Windows but also Linux and Mac. At the moment (April 2017) it is in Alpha state, meaning that levels from the original Core Design Tomb Raider Series can be played but there are limitations in stability as well as game play.

The project only provides the engine, all game files have to be taken from the original installation media (or download folder for newer versions like Steam or GoG).

The engine itself does not need any installation, it can simply be downloaded[1] and extracted from an archive. At the moment (2017) only 32-bit Windows binaries are provided on the project's GitHib page; binaries for other Operating Systems have to be build manually. The Win32 binary needs Microsoft Visual C++ Runtime Libraries[2] to be installed.

To play any of the classic games, the DATA folders have to be copied to the corresponding folder in the OpenTomb folder structure. Additional audio files can be downloaded from the TREP project.[3]

To start a specific game this has to be set in the autoexec.lua file in the OpenTomb main folder via the setgamef() function. Single levels can be selected by the loadMap() function instead.