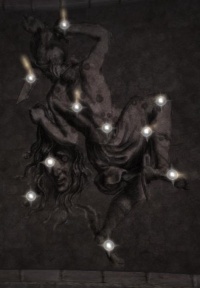 A mural from Perseus Riddle where Perseus is holding Medusa's head

Medusa was a figure in Greek Mythology. She had the power to turn man to stone. She was beautiful until turned ugly by Athena when caught with Poseidon. The hero Perseus beheaded her. He was one of many who tried but the first to succeed as he had help from Athena.

Inside Lara's Bedroom in the Croft Manor in Tomb Raiders Legend and Anniversary there is a round wallplate depicting Medusa. This wallplate is operated by two Small Lever Switches. It splits open in the middle to reveal a secret compartment. In Tomb Raider Legend Lara's Dual Pistols are stored here and in Anniversary it holds her Journal. if consulting the journal upon finding, Lara will share her thoughts on Medusa.