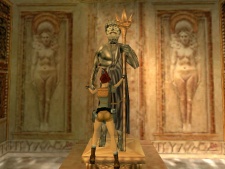 Poseidon is the god of the sea in Greek Mythology, known as Neptune in ancient Rome. He is often shown with a trident in his hand.

In The Last Revelation Lara explores the Temple of Poseidon near Alexandria. There she has to find four tridents and use them with four Poseidon Statues.

In Tomb Raider Anniversary, in the level Greece - St. Francis Folly, Lara finds a room devoted to Poseidon, who in the original Tomb Raider was falsely referred to by his Roman name, Neptune.

He is also mentioned in the comics. In issue 24 Lara shows Tsang Do Khyi a cliff that Poseidon shaped with his trident when he was angry.

Besides his appearance as Neptune in the Tomb Raider-Level St. Francis' Folly he will also be referred to by his Roman name in the level Neptune's Hall in The Angel of Darkness.