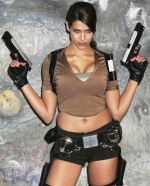 Karima has stated that she is a fan of Tomb Raider and that she got her first copy of the original game one Christmas when she was young.

Adebibe was apparently chosen for her good looks according to some websites and on others for the fact that her birthday was the same as Lara's, but she had to have etiquette and pronunciation lessons to make her sound more like Lara.