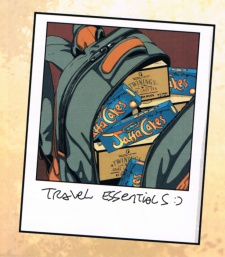 In issue #4 Hunted by Shadows Lara finds the apartment she shares with Sam ransacked. Inside a Jaffa Cake wrapper she finds a hint she has left behind for herself to find.

Later in issue #5 Sacrifice for a Friend we see Jaffa Cakes on a Polaroid image marked "Travel Essentials", among packages of Twinings Earl Grey tea, in a backpack.

In issue #12 Fall of the Curtain, Lara suffers from stage fright and her friend Sam offers her a pack of Jaffa Cakes, which in this case make her sick.

In the Rise of the Tomb Raider DLC Blood Ties you can find a relic called Note from Winston, inside the Library in Croft Manor. This note was left for young Lara and contains the message "Lara, Jaffa cakes next to William Blake", an Easter Egg for the Tomb Raider Comics.