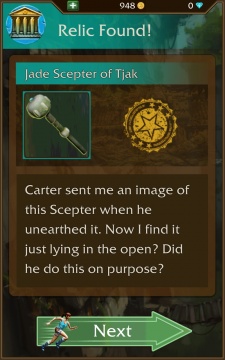 The Jade Scepter of Tjak is a Relic found in Lara Croft: Relic Run. It is the first relic that can be found in the Jungle Temple level and the first clue to the disappearance of Carter Bell.

Carter sent me an image of this Scepter when he unearthed it. Now I find it just lying in the open? Did he do this on purpose?
in-game info

The sceptre can be found after collecting one clue in the second level. (Originally five clues in endless mode before version 1.5.68.) This relic is found in the central lane, framed by two lion statues.

Jade Sceptre on the path
Retrieved from ‘https://www.wikiraider.com/index.php?title=Jade_Scepter_of_Tjak&oldid=50915’
Category: