From WikiRaider
(Redirected from Grenade)
Jump to: navigation, search

This disambiguation page lists articles associated with the same title.
If you were led here by a link, you may wish to change it to point directly to the intended article. 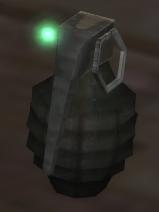 The Grenades can either be ammunition for a Grenade Launcher or Hand Grenades.

In Tomb Raiders II, III and The Last Revelation Lara can find Grenades which have to be used with the Grenade Llauncher.

In The Last Revelation there are three types of ammunition for the Grenade Gun.

In Tomb Raider Legend the hand grenades, which can be used without grenade launcher, make their first appearance. Lara can collect grenades lost by mercenaries and attach them to her belt until they are used.

In Tomb Raider Underworld there are special Sticky Grenades that stick to the enemy.