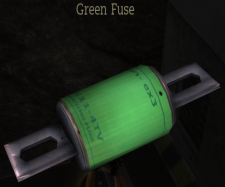 The Green Fuse is one of the three differently coloured fuses that are needed to proceed in the level. They must be inserted to their receptacles inside a control room.

Location of the Green Fuse

The Green Fuse is the second fuse to be found in the level. It is located on a ledge that is reached after a series of jumps along the conveyor belts that surround the control room area.