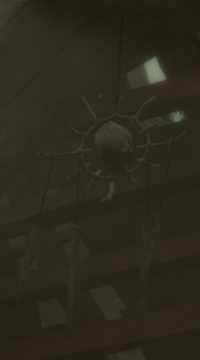 Ghost Hunter is the first Challenge in Tomb Raider Reboot. To fulfil this side quest, Lara has to find and shoot 10 Totems in the Coastal Forest location.

Five of these can be found in the area of the first base camp where the player learns to hunt using the bow, the other five are located near the gate Lara and Dr. Whitman try to open towards the end of the level.

Each collected Totem earns Lara +10 XP, the last one that completes the set earns her +150 XP.

Before the game was released, there was some confusion concerning the naming of this challenge. This was the first challenge seen in the Hunting demo presented at E3 and GamesCom. After show casting the demo Karl Stewart hinted that Ghost Hunter might just be a production name, but as it turns out it made it into the final version.