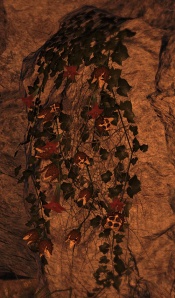 The Dreaming Blossoms are flowers that grow - among other places - in the Wicked Vale of the Baba Yaga: The Temple of the Witch Downloadable Content of Rise of the Tomb Raider. They emit a hallucinogenic pollen that gives bizarre and frightening visions to everyone that passes into the vale.

The Dreaming Blossoms play a central role in the Baba Yaga DLC: They are the reason why everyone that goes looking for the witch sees a witch house walking on bird lags and has visions of dead people. Baba Yaga uses the pollen to deliberately drive Team Bravo insane and make them compliant to a point where they forget who they are and why they came here so they will fight and die for her. She is the only one who knows the secret of the Antidote and thus can stay clear-headed.

Lara discovers the recipe for the antidote - which includes the Seed Pods of the flower - and with the help of Nadia is able to create some for herself. She then enters the vale again without being affected by the pollen.

After Lara successfully finishes the Baba Yaga DLC she can enhance her Poison Arrows with the pollen of the flowers to induce fear and confusion in her enemies in addition to poisoning them when using the Dreamstinger Bow.

The Dreaming Blossoms are yellowish funnel-like flowers that grow in dark places like on the walls of certain caves in the Soviet Installation. The plant itself consists of several tendrils that besides the blossoms sprout green leaves. In smaller doses the pollen are mostly harmless, but in the cave that leads to the forest of the Wicked Vale they are cultivated by Baba Yaga and therefore the amount of pollen inhaled is much higher.