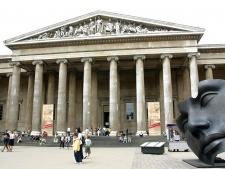 The British Museum is a famous museum in London. At the end of Tomb Raider Legend Lara sends Alister there and tells him to ring her when he arrives.

The museum is also mentioned in the Comic Tomb Raider / The Darkness Special.

The origins of the British Museum lie in the will of the physician, naturalist and collector, Sir Hans Sloane (1660-1753) [4]. Sloane wanted his collection of more than 71,000 objects, library and herbarium to be preserved intact after his death. He bequeathed it to King George II for the nation in return for payment of £20,000 to his heirs. The first famous antiquities, Sir William Hamilton's collection of Greek vases and other classical objects, were purchased in 1772. These were followed by such high profile acquisitions as the Rosetta Stone and other antiquities from Egypt (1802), the Townley collection of classical sculpture (1805), and the sculptures of the Parthenon, known as the Elgin Marbles (1816).