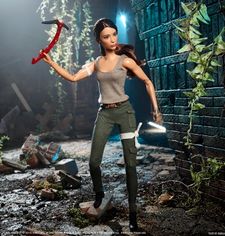 The Lara Croft Barbie Doll (aka Tomb Raider Barbie) by American toy manufacturer Mattel depicts Alicia Vikander in the role of Lara Croft in the 2018 film.

The Barbie doll resembles Lara from the first reboot game: it has long brown hair, a grey top, green trousers, as well as a tourniquet on her right arm and left leg. The box also contains - besides Lara - her red Climbing Axe, a map of the island, and her journal as well as a doll stand and a certificate of authenticity.

Rumours of the release of this doll started around August 2017. In February 2018 the first high resolution images appeared on the internet.[1] Up until then there had been no official announcement and the release date was still unknown. On 18 February 2018 IGN[2] announced that the pre-sale would start the next day; the doll was expected to cost 29,99$ on barbie.com.