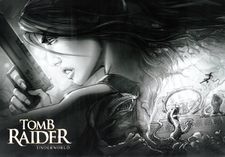 Square Enix and Microsoft announced today, that the Xbox 360 version of Tomb Raider: Underworld is now compatible with the Xbox One. A detailed description of how to install it on your Xbox One can be found at tombraidergirl's blog. If you already own any of the DLCs - e.g. Beneath the Ashes or Lara's Shadow - you will be able to download and play these, too.

Additionally Square has released seven new concept arts for Tomb Raider: Underworld, which can be viewed in full detail on our forums.