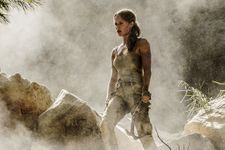 Additionally Crystal Dynamics released a FAQ about the upcoming movie:

Q: Will the Tomb Raider movie take place in the Reboot universe?
A: Tomb Raider will take place in the reboot universe established by Crystal Dynamics’ award-winning game of the same name. MGM and Warner Bros. – under the talented direction of Roar Uthaug and scriptwriter Geneva Robertson-Dworet – have creative freedom to best translate Lara’s journey to the big screen. We are very excited to see Alicia Vikander, Walton Goggins, Dominic West, Daniel Wu, and the rest of the all-star cast bring the spirit of Lara’s formative adventure to life in Tomb Raider.

Q: When will Tomb Raider release?
A: Tomb Raider will release to cinemas worldwide on March 16, 2018

Q: How far along is production of Tomb Raider?

The official story synopsis can be found in the Tomb Raider (2018) Article.