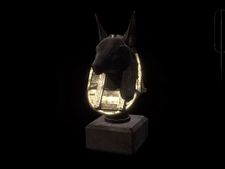 Anubis (also transcribed as Inpu or Anpu) is the Egyptian God of death and mummification. His Hieroglyph is a jackal and he often depicted as a human with the head of a dog or jackal.

In Egyptian mythology the heart of the deceased was weighed by Anubis, using a feather, representing Ma'at, the goddess of truth and justice. Only those whose heart was as light as the feather would be allowed an afterlife; those who failed the test would be consumed by Anubis..

Anubis in the Tomb Raider Games

Anubis is mentioned in several times Tomb Raider, although we never actually see the God in person.

The name of Gaafar's rifle

An artefact and key found in both the original Tomb Raider and its remake Lara Croft Tomb Raider: Anniversary

Lara awakes the spirits of Anubis in this stand alone level